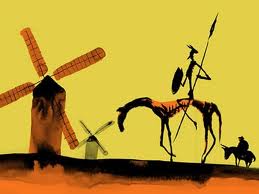 I recently got a chance to work with my friend Richard Nossar's band, Peruvian Psych/Doom merchants DON JUAN MATUS. A split 7" was just released with legendary 80's Lima Metal/Hard Rock band OXIDO. There's not too much info in english regarding OXIDO, so I decided to write up a brief history along with some questions answered by guitarist & founding member Javier Mosquera.
Pick up the split 7" here, only 300 copies pressed.
http://wardancerecords.bigcartel.com/product/oxido-don-juan-matus-split-7

OXIDO started in 1982, founded by 4 teenagers growing up in Lima, Peru. Taking their name, meaning Rust in english, from Judas Priest's cover of Joan Baezs' "Diamonds & Rust". They are heavily influenced by the hard rock sounds of AC/DC, Van Halen/Kiss. The idea is to make a band that combines the dark vibe of Black Sabbath, the potency of Deep Purple/Led Zeppelin & the romanticism of Uriah Heep. First rehearsals consist of acoustic guitars, plastic drums held together with cellophane & rotating musical chairs. By 1983 the line-up has solidified into Fernando De La Flor on vocals, Javier Mosquera on guitar, Jorge (CoCo) Cortes on bass & German Vegas on drums. Their live debut later that year, at a 20-bands festival, lasts approximately 20 seconds due to time constraints. The band continues playing alongside a wide variety of bands, like the Punks in LEUZEMIA, Commercial Rockers FRAGIL, Jazz fusioners MADERO JAZZ & the reformed 70's hard rockers PAX. They go into LOS SHAINS/PAX guitar hero Pico Aguirre's studio to record demos that end up being broadcast over a local Lima Rock station. Towards the end of '84, their vocalist leaves & is replaced by Reynaldo "Culebra" Linares. His magnetic stage presence & potent vocal style is soon overshadowed by increasing dictatorial demands like only singing songs he wrote & insisting the band wear matching outfits onstage, something the other members vehemently oppose.
In 1985, the band parts ways due to divergent views on musical direction, some opt for a heavier sound & others want a more progressive rock style. They soon dissolve & form new bands according to their chosen musical path, but not without first influencing a whole new generation of loud/heavy sonic purveyors, like the Tuesta brothers, who would go on to form MASACRE & kickstart the Heavy Metal scene in Peru.
Flash forward to now, OXIDO are back in 2012 with new recordings/concerts, but I'll let guitarist Javier Mosquera fill you in on the details:


When did the band dissolve & why was nothing released until now?
The band parted ways in late '85. Nothing came out on vinyl in those days because it was very difficult & expensive for us too record anything. We had all just finished school, no one had a job & live appearances were minimal. A lot different than today's readily available recording technology. We did do some (poorly) recorded demos & when we started doing better ones, through experience gained in the studio, we were already breaking up.

The song on the split 7"(Angel De La Muerte) is an old song, when was it re-recorded?
The song is from '84. I think Coco Cortes should remember the exact date, since he composed it. We re-recorded it in march/april of 2012 & finished the mixing when Coco came back to Peru for a concert of his band, MAZO.

You guys are considered the pioneers of Heavy Metal in Peru, what do you think of that term?
I think that the pioneers of Heavy Metal were MASACRE. We played a heavy basic rock style with some Metal elements thrown in on the later songs we wrote. I think we were more in line with being one of the first bands that picked up the legacy of such Peruvian greats like PAX & TARKUS, both heavy rock bands from the 70's. There were few bands playing that style in those years ('83-'84) & we were lucky to play with some heavyweights from the rock scene. Credit goes to people like Hector Cobos, who booked concerts for us with such diverse bands as LEUZEMIA, TV COLOR, PAX etc..


What other groups did you & the other members start after Oxido's breakup?
When we broke up, Coco Cortes started POLVAZO & GRAEL. He later played in TORTURA & KRANIUM & lastly formed MAZO. Myself & the drummer started the progressive Rock band ERA. I then joined DHARMA & ORGUS for brief periods. I formed ALMAS IMMORTALES next & then joined progressive outfit APULUZ in '89-90. Me & the singer launched Oxido in the mid 90's with Giovani Viale on drums & later 2 members of MAZO (Julio 'Naka' Almeida & Billy Astete) replacing German & Coco, but for various reasons, discontinued in '98. I then formed an experimental project called PROTOZOARIO & then lastly started EL VIEJO in 2002, that band lasted until 2011. Oxido played again in 2000 with the bassist of EL VIEJO, Jose Mejia. We've been recording & playing out  as of late with all original members except for Coco Cortes, who's been replaced by Orlando Del Carpio from the band RULA.

Do you feel that Oxido is part of a Rock n Roll tradition in Peru, starting with bands like LOS SAICOS in the 60's, TARKUS/PAX in the 70's & you guys in the 80's?
I think that, without planning it, there came to be a dry spell of hard rock in Lima. We were part of  the beginning of a movement that got stronger as the years went by with bands like ORGUS, MASACRE, JERUSALEN, MAZO, KRANIUM, SACRA, DHARMA & many more.

How did you get in contact with DON JUAN MATUS? Familiar with their material?
Yes, I know their stuff: heavy psychedelic vein. I played on a couple of songs with them. I got in touch with Richard Nossar/Manolo/Joaquin from DJM, who played together in those days.


What are you up to these days in Peru?
I travel throughout the country doing topographical ground surveys, getting a chance to see a bit of the eco-biology. Also, trying to organize concerts with people related to the bands. I thank you & the guys from DON JUAN MATUS for promoting our material & also Hector Paez, who's supported us with recordings/rehearsals & facilitates in all aspects our work with Oxido.

What does Metal/Hard Rock mean to you now?


It's an alternate universe that allows a Vibrational Metamorphosis.

Thank you for the interview Javier. Rust never dies!
-Freddy 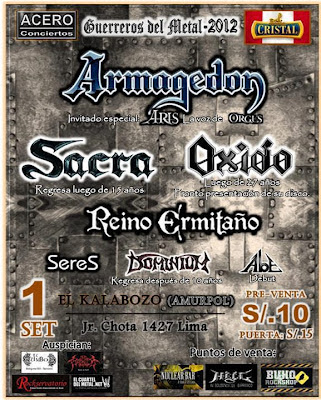 Promote Your Page Too

Freddy Alva
Born in Peru, grew up in Queens, NYC.